The great debate of whether to use Microsoft Access 2016 macros or the higher level of VBA code will linger on until the end of time (or realistically, Access is discontinued)!

In the meantime, most Access developers will continue to lean towards Access VBA but the majority of power users, self-taught Access designers will still embrace the ease of g using macros to automate their databases. 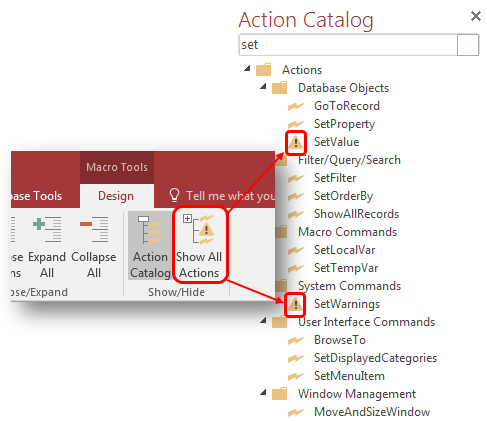 With the later versions of MS Access (post 2010), macros have become more powerful and flexible and with the added introduction of better web integration and the fact VBA is prohibited when publishing your database objects online, there’s now an even stronger case for macros becoming the first choice tool.

However, not all macros are deemed safe and certain keywords have also been prohibited which by default are not visible when working in the macro design view mode.

In the design view mode for a new or existing macro (I’m using version 2016) which can be created either via the Navigation pane which makes these macros public or via a typical Access object like a form or report which will make these macros private (note the scope between the two ways macros can be created!), You will see under the ‘Design’ tab in the ‘Show/Hide‘ section, two icons with the first revealing the Action Catalog pane view and the second icon to reveal the non-safe keyword macro commands.

As I already mentioned, by default the second icon is switched off leaving only the safe macro keyword commands knowing full well any published objects will work online. When you switch this to reveal the non-safe keywords, they are very obvious with a little exclamation icon indicator appearing to the left of each no-safe macro keyword.

It confused me when I first used the newer versions as a common macro keyword called ‘SetValue‘ has been demoted to unsafe and thought this was actually been dropped and superseded by another newer keyword – but no, it was hidden!

So, normal service continues for the seasoned macro user but you may want to check out another blog post on Microsoft Access macros which leads to my ever popular eBook on How To Use Microsoft Access Macros & Automate Your Application.