MS Access Data Projects: 4 Guidelines to Help You Move On

MS Access Data Projects: 4 Guidelines to Help You Move On

With the most recent versions of Microsoft Access 2016, it no longer offers support for Access Data Project (ADP) files but for the more seasoned releases it will still continue to support ADP’s. End-users will find it imperative to learn about the alternatives they could use when planning to update the application.

Before recommending any options, there are certain basics you need to understand first.

Microsoft Access 2016 is due SQL Azure will need to under go substantial changes to support ADP file formats. Even though ADP’s are of great use when working with SQL Server on-premises, that may not generally be the situation. Noting this, Access has quit supporting ADP’s altogether. It has simultaneously launched an application that can be used for creating web-based Access applications which likewise utilises SQL Server as well as on the cloud. 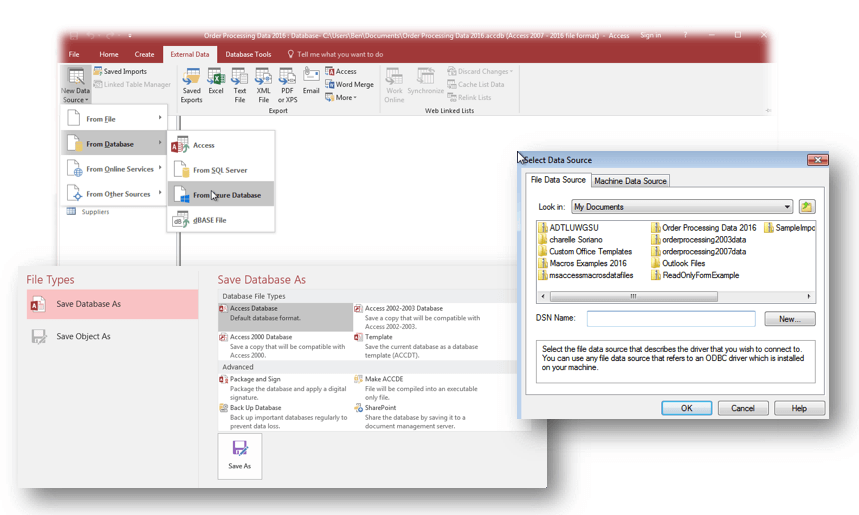 Future of ADP and its substitutes

Those who have acquired the older editions of Microsoft Access 2016 may continue using ADP though none of these versions will be amended to support the latest versions of SQL Server and SQL Azure. Thus, using ADP’s with the recent releases of SQL Server might create issues. For this reason, we have listed below the four alternatives you can use.

You can make use of Access for importing your existing tables to another Access application. In this procedure, new forms for the application will be created automatically. You decide on expanding the functionality of Access based forms and enable the user to access your application through the web.

The support for creating .accdb desktop databases still exists therefore you would be able to decide on converting your application with all its objects to this format. You can as well settle on connecting these databases to SQL Server by using linked tables. This enables your application to work with existing data.

If your application contains huge volumes of data, and you don’t wish to convert every bit of it at once, you can choose to import the data in an Access application then connect it to a SQL Server database. The process of migration will happen gradually, with forms and functionalities being added to the Access application over the course of time.

You might have an Access application that is too intricate to be moved to a platform that’s as specialised as a .NET Framework. SQL Server is designed to make the process of shifting application less demanding. This permits you to make use of your existing database framework, alongside extending the functionality of the application without making changes to the code or re-writing it entirely.

MS Access has initially been intended to give you applications that can instantly create and share data which is used for maintaining your business. And after so many years, this exceptionally easy-to-use database is still utilised by millions worldwide. However, it has the disadvantage of hurling corrupted mdb records that occasionally pops-up. To manage such situations, it is good practical to keep a backups and set restore points on your system.