If you have ever browsed the Access options and design properties of your database then you will know some of the neat tricks that help to blend your database application into your Windows environment But how to open Microsoft Access database (file) and make it appear to be outside of the application is an illusion that maybe useful.

In this quick tutorial, I’m going to create a blank canvas form as the background and maximize it so it covers the whole application which will require some combined form property changes too.

On top of that, I will call another opening form (your starting form) to sit in front as the loading screen to your application and finally tweak the application options to tie it altogether.

This tutorial will require two lines of VBA code to be included in order to complete this task on how to open Microsoft Access database outside the application and is a standard keyword that can be easily understood.

1. Start your application and open the database file you wish to make appear outside the application having the Navigation pane in full view.

2. Decide which form you want to start and open automatically when the database loads. I have chosen a form called frm_SearchTool which on its own looks like: 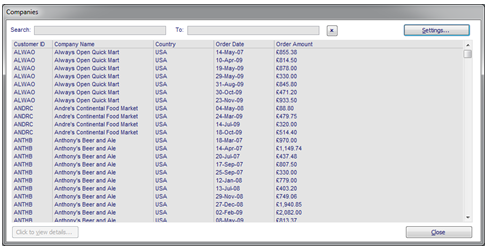 3. Make sure the form properties (in design view) for your starting form has at least the following set:

4. Create a new blank form and call it frm_Background and make sure at least the following properties are set:

5. In this new form, we are going to add the two lines of VBA code to the On Load event which triggers itself when the form loads.

Locate the On Load event by clicking the Event tab from the Properties Sheet and choose [Event Procedure] followed by the button (three dots) to it immediate right.

7. Close and save the changes.

8. The final part is to tell Access which form to load when the application starts by going to its options and setting the Current Database section and choose the form frm_Background from the Display Form: drop down box.

9. Test it out! By restarting the MS Access and the database file.

So if anyone asks you how to open Microsoft Access database appear outside of Access, show them this article.

If you would like to know more about how to build and code an Access database, my eBooks maybe a good place to start.